You are here: Home / Saddle Making / Working Without a Net 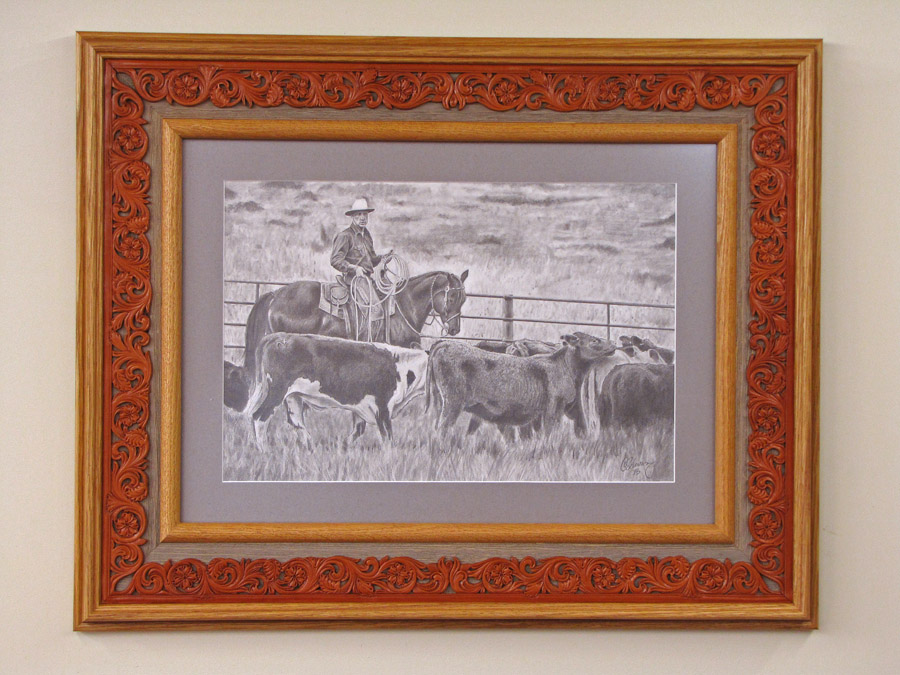 It was exactly thirty years ago in “The Little Red Barn” on Main Street , Bozeman, Montana. I was working for Rocky Mountain Saddle Company owned by Frank Ford doing mostly repair work. It was a sticky Montana summer spent hunched over used saddles in the back of a renovated barn. In the front was a small retail, in the back only a screen door separated me from the sights, sounds, and smells of Bozeman, a college/cow town that would change so much in the coming years. Cowboys, pleasure riders, and the occasional local gentry would drag their equipment in through the back as the screen door slapped behind them. They were the likes of Sheriff John Onstad, legendary Flying D cowboy Roland Moore, PRCA team roper George Eddie, and teamster Paul Kink. In the front hung a small flyer written with a magic marker announcing a horsemanship clinic hosted by a local young man by the name of Buck Brannaman.  It was there that I met Joel Nelson, well known Texas cowboy who once started colts for Hawaii’s Parker Ranch. In those days, the College National Finals Rodeo was held at the Brick Breeden Fieldhouse in Bozeman every June.

Then there was Frank who was a thoughtful fellow and a good guy to work for. One day he shared his hopes for his little business…Bozeman was the place to be and besides, “every person in the United States has a latent desire to be a cowboy.”

“Pfft!” I sniffed, “just look around…what about those folks who wear Birkenstocks?”

“No…it runs deeper than that…you have to study it like the Bible. And you have to think about how we define ‘cowboy’.”

I’ve thought often about Franks comments over the years. Certainly, when you consider a broad definition, you run into more “cowboys” than meets the eye.

“The cowboy has been seen from a primitivist point of view: wild, alone, antisocial. In fact he was just as plausibly an economic ideal: during a period of growing industrialization, of factories with workers as wage slaves,” the cowboy was a free worker who liked his work. Not because the job was easy or paid well, but because the job offered self-respect, rewarded skill and guts, could be done with pride. It reminds me of teaching. The cowboy was a free worker who was not alienated from his product. He was a nineteenth-century democratic and Jeffersonian alternative to the new degradation of workers: he was a poor man, uneducated, but he had freedom, dignity, and that ancient symbol of aristocracy: the horse. Which he rode, not walked behind. The bottom line of his freedom was always his potential to say, “Take this job and shove it.”

When you see the words “It reminds me of teaching.”, read “I have a latent desire to be a cowboy.” Bevis seems to fall into that category of folks who wish for the things the cowboy life offers.

Who doesn’t want the things that this part real, part mythical figure represents?…Freedom, authenticity, autonomy, courage, self-reliance, skill, and all this from the back of a horse…the universal symbol of strength and grace. There are many who would say that these attributes are what built this great country.

But social change is accelerating, and cowboys have become more of a novelty, but they are still free spirits who work without a net, and are not dissuaded by convention. This is all sounding a lot more like self-employed craftsmen all the time! …or anyone self-employed in small business for that matter, but I can’t help but think of farmers and ranchers in particular. Incidentally, the job I had in the saddle shop in Bozeman three decades ago was the last regular paycheck I have received.

But maybe Frank was right… maybe those disaffected folks out there would be “cowboys” in another life. Maybe they already are…they just haven’t realized it yet.

Prev: Maple Leaves, not Mapplethorpe…
Next: One, or Two?