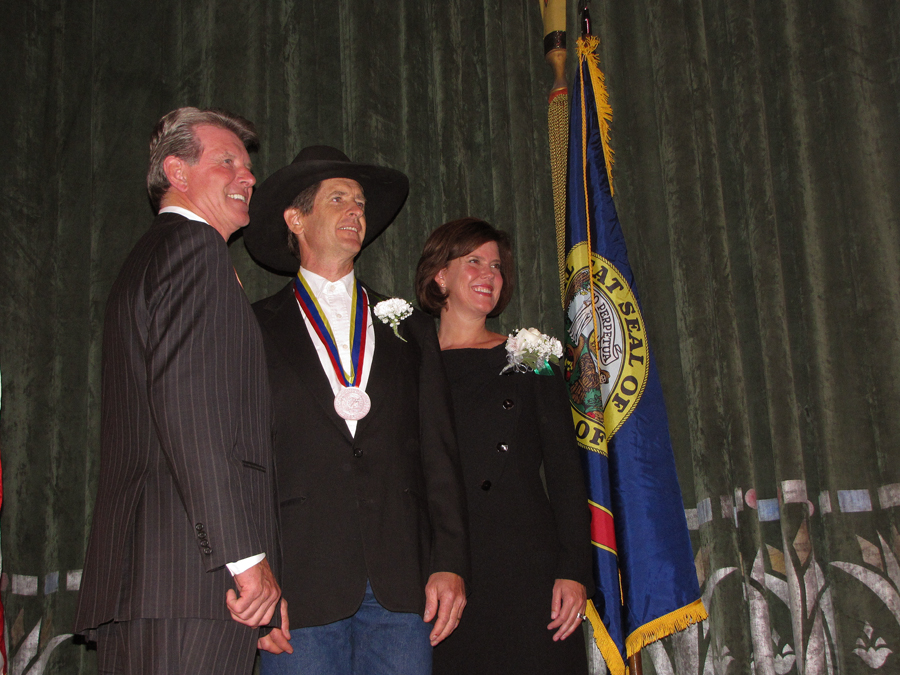 It was September 23, 2010. I was settled into my seat in the front row of the historic Egyptian theater in downtown Boise. The theater was classic architecture with an exotic twist. Painted Egyptian figures and statuary gave the interior an other-worldly flavor.

I thought about how wild the week had been…and it wasn’t over yet! I’d been in Oklahoma City for a couple days helping teach a class in hand sewing at the National Cowboy Museum. The Idaho Commission on the Arts was gracious enough to get me to Boise from Oklahoma to accept the Governor’s Award for the Arts. Tomorrow morning I would hop a plane back to OKC in order to finish out the weekend’s events with the Traditional Cowboy Arts Association exhibit opening. There would be ribbing from the guys back at the Museum about my jet-setting ways. The jabs wouldn’t stick because they knew that my life style was the same as theirs…anything but life in the fast lane.

They also knew that a little recognition for one of us was a good thing for all of us. I rolled my short acceptance speech around in my head enough times that I was ready to be rid of it. Fortunately I was the first recipient of the evening so I could relax while the parade of artists, educators, curators, and musicians accepted their medallions. I felt like I was too young to be in such heady company. After all, my mentor Dale Harwood had been given the same award just a few short years before. I wasn’t ready to think of myself in the same category as Dale, but here I was none-the-less.

This event would be another chapter in the story, “How a saddlemaker became an artist” even though I’d been called an artist of sorts my whole life. It was usually meant as a compliment but occasionally, well, not so much. Most craftsmen are uncomfortable with being labeled an artist. Me, I’ll answer to either or both. I just don’t see that much distinction.

You may have read the quote that has been credited to James Michener:

“A master in the art of living draws no sharp distinction between his work and his play, his labor and his leisure, his mind and his body, his education and his recreation. He hardly knows which is which. He simply pursues his vision of excellence through whatever he is doing and leaves others to determine whether he is working or playing. To himself he always seems to be doing both.”

I believe this ideal can permeate any vocation, be we tend to think of craftsmanship as work, and art is play. When I look at what I do, I have a hard time deciding which is which. But then, I am reminded that I don’t have to decide after all.

For now, I’ll let others worry about that  and I’ll get back to work on the floral design for this buckaroo’s saddle. Front and rear jockeys for a buckaroo’s saddle