You are here: Home / The Blog / Renaissance 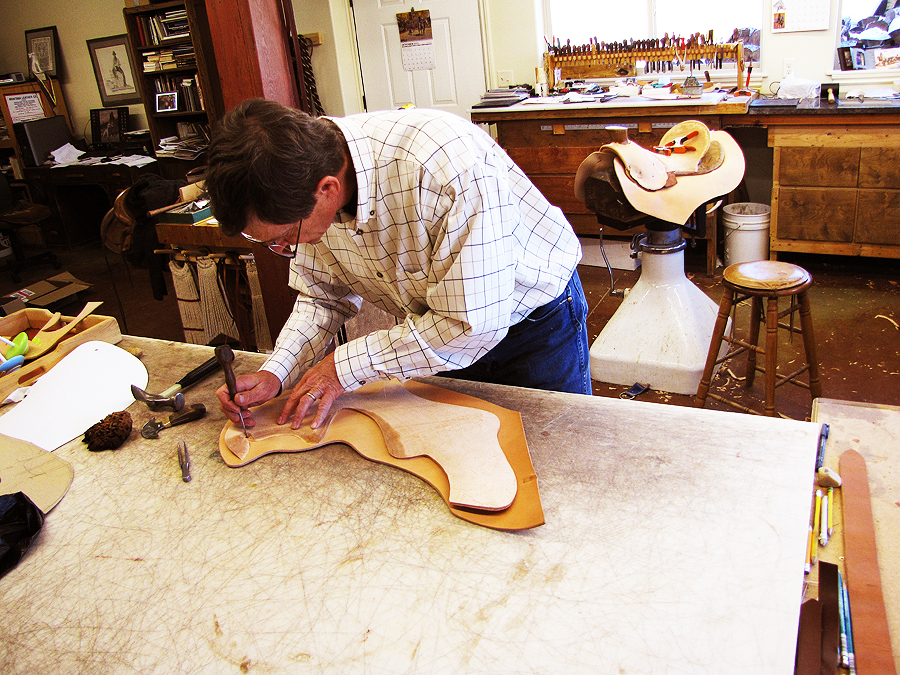 I was asked to write a little ditty for the Western Folklife Center in Elko, Nevada. They’re the folks who are the legs beneath the annual Cowboy Poetry Gathering. The current show that is on display there features cowboy craftsmen who are under the age of 40. (Ok, so I barely missed that one!) This is a historical perspective from my point of view on how things have lined up to produce the renaissance in the trades we associate with our Cowboy Culture. I’d be interested in your thoughts on this subject. Thanks to Andy Stevens who asked me to write this, and to Meg Glaser for her editorial skills.

BUILDING ON A LEGACY

An exhibition looking to the future of gearmaking in the American West would not be complete without acknowledging the contributions of artisans that have come before. The newest generation of artists working in leather, silver, horsehair and rawhide and represented in this show is entering a renaissance in the trade that began 25 to 30 years ago and continues to flourish. The Dale Harwood saddle and four gearmaking videos on view here pay tribute to just a few of the many individuals that have contributed to that renaissance.

In addition to individual artists’ contributions, several key cultural events have shaped the western gearmaking trades that we know today. In the late seventies and early eighties, photographers Kurt Markus and Jay Dusard brought the world of the Great Basin buckaroo to larger view. Their beautiful black and white images brought focus to the handmade and often highly decorated equipment of these working cowboys.

By the mid-eighties, the Dorrance and Hunt brand of horsemanship was gaining traction. These horsemen rode only the highest quality saddles, and those who attended their clinics followed suit. Ray Hunt and his students created an ethos that included handmade saddles, bringing high quality custom work to an audience far beyond the ranching community.

The success of the first Cowboy Poetry Gathering in Elko in 1985 spawned countless similar events across North America. The template that ”Elko” offered included a cultural platform for all ranch-based traditions, including the work of custom saddlemakers and other gearmakers.

In 1986, the CoconinoCenter for the Arts in Flagstaff organized the first “Trappings of the American West,” a high-end gear and art show. Trappings shows sprang up all across the West, further increasing the visibility of handmade work.

Also, numerous associations, guilds and trade shows have been formed to serve the needs of one-person saddle shops and other trades. Among them, the Traditional Cowboy Arts Association produces an annual exhibit at the NationalCowboyMuseum in Oklahoma City and lectures and workshops for aspiring craftsmen. Trade shows focusing on the leather industry have proven to be overwhelmingly popular. The first of its kind was organized in Sheridan, Wyoming, and many venues throughout the West have followed their lead. There has likely never been a better time for craftsmen to enter the field, with so many ways to help improve their work.

These cultural events are planets that have lined up in such a way that the quality of work has increased, customer awareness has risen, and the renaissance continues. Current gearmakers are learning from their predecessors, and with the open flow of information, they have access to the next layer of information regarding both the function and art of the trade. Today, gearmakers are enjoying the expanding possibilities for growth and refinement. These educational opportunities serve an important role as the western trades struggle to remain relevant in an age of rapid cultural and societal change.

Prev: Old Stuff
Next: Not too many