You are here: Home / Functional Art / The Ground Seat 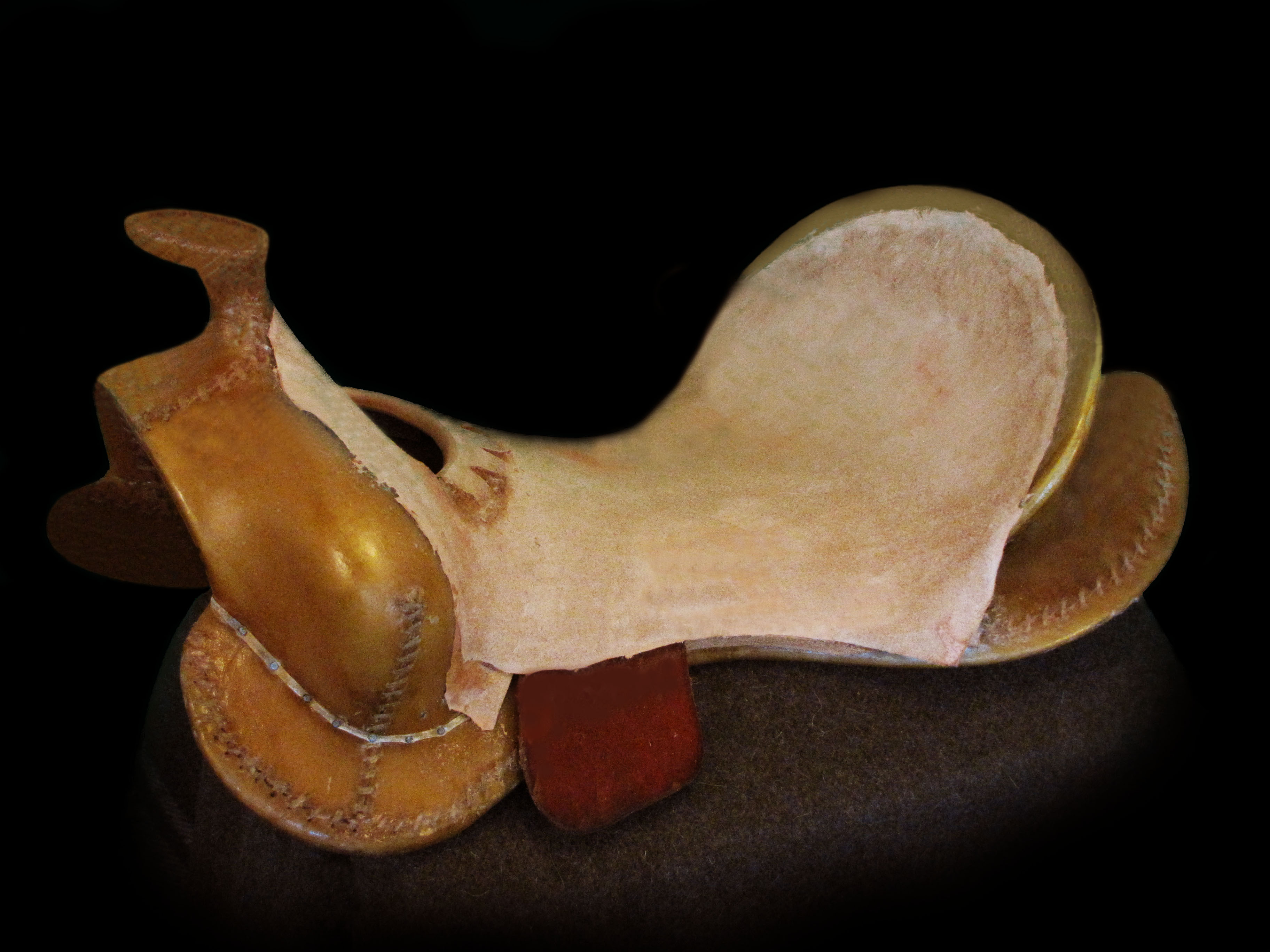 Saddle makers are often asked what a person should look for in a comfortable saddle. Though it is a fair question, a simple answer is tough to come by. The key lies in what is called the ground seat.

Although many riders are unfamiliar with how the ground seat is constructed and how it works, they will certainly have an opinion about it if it’s not working for them! By definition, it is the part of the saddle that is sandwiched between the visible seat leather and the saddle tree underneath. It is usually made of a galvanized piece of sheet metal called a strainer plate, and covered with layers of leather that are shaved down to the desired shape. This shape is what is critical to the usability of the saddle.  Occasionally, the saddle maker will use only leather to span the space between the bars. Most factory made saddles have injection molded plastic trees that have the ground seat already built into the tree.

There is a never ending debate regarding the ‘proper’ shape of the ground seat. Much of this discussion revolves around subjective terms like ‘balance’, ‘narrow’, ‘wide’, and ‘deep’ to name a few. These words roll off our tongue in a way that makes us sound like we know what we’re talking about, but these terms defy our attempts to define them in a way that everyone can understand. Chuck Stormes once said, “When they say ‘narrow’, what they mean, is ‘comfortable’.”  Comfort, he says, is maximizing the contact between leather and rider. That is to say, even distribution of pressure from the crotch on down to where the leg starts to separate from the side of the horse. Incidentally,this is the same goal of fitting the saddle tree to the horse.

There are several things to remember that help clarify how this is a moving target. First of all, those who have ridden a certain saddle enough to be comfortable may have learned to compensate for the shortcomings of an inferior ground seat. Anything different may seem uncomfortable until they become accustomed to the new paradigm. Secondly, the stirrup leather adjustment can come to bear in how the hips are positioned in the seat. Thirdly, the rider’s posture has a direct bearing on where the hip bones (ischial tuberosity for you anatomy geeks) are resting in the seat. If the rider has good posture, these bones will align under the torso as they should be. Occasionally we see rounded -back riders whose hips are rotated forward where the ground seat may not be so accommodating. All these factors and more are a part of the puzzle that the saddle maker has no control over.

Ground seat theory will always be an inexact science, but a study of what actually works for a wide range of riders reveals some clues as to what will work for most. Generally speaking, a good seat is one where the hip bones are nestled in the lowest point of the ground seat. This is going to be roughly one third the distance from the cantle to the fork. Chuck Stormes describes this low point as being 3 ½” to 4” rearward from the center of the stirrup leather slot. There are many saddles that have a low point much further back than this. If a rider finds this comfortable, it is likely because they are accustomed to riding with a certain amount of brace in their body from the soles of their feet to the cantle. This would be an example of ‘riding the saddle and not the horse’. You will not see this kind of brace in a rider who is in tune with the motion of the horse.

Once we identify the lowest point in the topline of the seat, the shape from side to side can be addressed. Most of the good shaped seats are fairly flat across the base of the front of the cantle. This relative flatness should extend forward, narrowing as it goes. This shape can be likened to the old-fashioned three cornered bicycle seat. This provides that the hip bones have a relatively level surface to bear, as these bones are going to be approximately 4” to 5” apart on an average person.

Ground seat theory is a slippery subject at best, but it is a worthwhile study for saddle makers and conscientious horsemen alike.  The Traditional Cowboy Arts Association has produced an instructional DVD on the subject that can be helpful for saddle makers and anyone interested in this important aspect of their saddle.