You are here: Home / The Blog / It seemed like a good idea at the time… 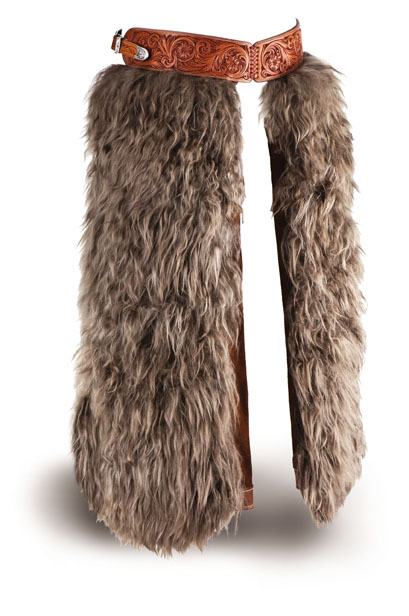 The story of the 2009 TCAA Woolies began in 2007. I’d been looking for a source for good quality angora goat to use for chaps and unfortunately almost all the hides available had hair that was too short for an attractive pair of woolies. I eventually discovered a tannery in Texas that sold goat hides and offered a custom tanning service as well. “What if…” I thought, “… I was to find a couple goats still on the hoof, and keep them until their hair was the length I wanted, then process the goats and send the hides to the tannery?” It seemed like a good idea to me! An internet search netted a couple goat breeders within two or three hours from where I lived. I spoke with them on the phone and before long I was a proud owner of two seven year old bucks. ”But would she keep ‘em until I arranged for a place to put ‘em?” That would work for the goat lady, so it was out of sight and mostly out of mind for the summer (some would say out of my mind as well). Then one day she calls with bad news…one of my goats was sick. “Keep him alive if you can, but I would understand if you can’t”. “After all, this is the livestock business.” I thought to myself. A week later she calls with the news that the buck was dead, but she had another that I might be interested in. Next thing you know, there is a check in the mail to her for another goat, the summer feed bill, and a vet bill for the dead goat. You may call me a trusting soul, or horribly naïve…or maybe both, but suddenly there was a priority for getting my two goats home. I found a back haul with a friend who was taking some cattle to the sale. After the goats were loaded and headed my way, the lady tells me on the phone that she has coccidiosis in her herd. What had seemed like a good idea at the time was turning into a bit of a nightmare. Any further business with this goat lady was a bridge burned beyond recognition. But there they were… the goats were home safe and sound…more or less.

That fall I had to be away for a few days. When I returned, I found that I was down to one live goat. It turns out that some dogs had ripped the throat out of the smaller of the two. Thankfully, my wife had called a good friend who came over and skinned the goat, and the hide was in the freezer. The hair had grown to a nice length, so it seemed that I was back on track. Later I dispatched the other goat and sent both salted hides to the tannery in Texas.

Months later, the tanned hides were finished, but the nightmare wasn’t over. The larger hide had beautiful long hair except for a large bald patch in the middle of the back. The tannery had trimmed off a piece of leg and glued it onto the bald spot hoping I wouldn’t notice…”Wow, these folks are pretty remarkable.”, I’m thinking to myself as another burning bridge collapses as I escape to my side of the river. But there appeared a diamond out the ashes. The second hide came back a beautiful grulla color rather than the chocolate I had ordered. The hide from the replacement goat that was killed by the neighbor’s dogs, was made into a pair of woolies that were exhibited in the 2009 TCAA show. Scott Hardy did an exquisite job on the fully filigreed sterling silver…he even placed a bronc figure on the buckle that features a rider with a pair of woolies. These woolies are now on display in an elegant great room on a working cattle ranch owned by a dear friend.